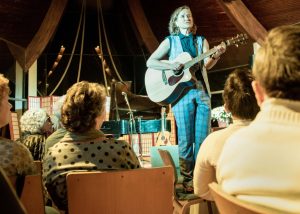 The Unitarian Church in Westport has a long musical tradition. Over the years there have been many musical concerts, featuring many genres: choral, chamber orchestra, jazz…and folk.  Music continues to be a big part of ministry. For example, the Church has seven choirs. In addition to the choirs, there are musical celebrations of all sorts and Cabaret evenings featuring musical performances by church members. Truly a musical community within the larger community of the church.  We even have our own folk-rock/gospel/spiritual group: Exit 43, named after the missing exit between Westport and Fairfield on the Merritt Parkway.

In this rich soil of spirit and music the idea for Voices Café began germinating in the Summer of 2010.  In June we had a combination folk concert and cabaret featuring a young group from Boston, Garlic and Moonshine. We had so much fun that some of us started thinking about plugging ‘UU Westport’ into the vibrant folk circuit in New England.  Using our beautiful sanctuary as a new venue for folk artists seemed to be an idea whose time had come!

Why folk? The tradition of folk music is emotional, spiritual…and political. Folk songs talk about the deeply personal, social, environmental, and political issues of the day, touching the heart as much as the mind.

Why social justice?  Social justice speaks to the universal hunger for freedom: freedom from fear, from hunger, from oppression, from discrimination, from being in any way ‘invisible’. Faith traditions, race and class often define us by our differences. Social justice can and should define us by what we hold in common.

Thus, we seek to combine the music of freedom with the actions of social justice. We are just starting a journey of faith.